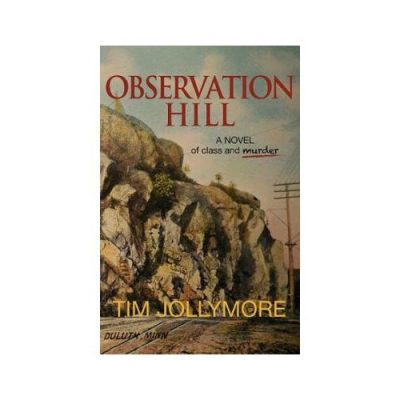 Tim Jollymore presents his new book Observation Hill on Saturday, August 8th at 1:00pm.  Stop by to meet him and get your signed copy!

Police Detective Paul Tuomi has his hands full: He has just been assigned the highest profile murder case of his career, is in the middle of investigating the strange death of a family member, and is about to cross the line on a long ago failed marriage.

Paul’s love of his working-class beginnings—embodied his involvement with  his high school sweetheart and her son—and bond with his private detective father who lives under the cloud of a 40 year-old bootlegging murder fray the ties he’s made with the city’s old patrician elite.  Paul can set to right his own life only if he can solve the puzzles of the deaths of three others. Complicating the already complicated is Tuomi’s nemesis, Ingstrom, a teenage crime-magnet from the toney side of town.

Out east, with pressure from the powerful and the press to arrest the black sheep of the murdered heiress’s family, Paul is pushed to disregard eye-witness fact and bring to heel his west end sensibilities or face demotion on his job, the end of his marriage, and the loss of his long-time lover. He learns that the key to everything lies in catching the illusive Ingstrom.