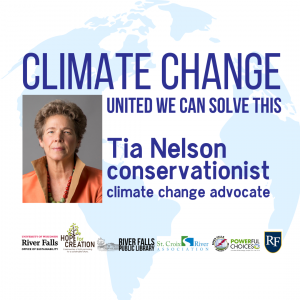 Climate Change: United We Can Solve This, Film and...

Tia Nelson will discuss the film created to inspire the continued legacy of her father, former Governor of WI Gaylord Nelson, founder of Earth Day.

Nelson is internationally recognized as a tireless champion for environmental stewardship and climate change education. She spent 17 years with The Nature Conservancy in government relations, as a policy advisor for Latin America, and later as the first director of the Global Climate Change Initiative. For this work, she received the EPA’s Climate Protection Award in 2000. Tia returned home to Wisconsin to serve as Executive Secretary to the Wisconsin Board of Commissioners of Public Lands, which included a gubernatorial appointment as co-chair of Wisconsin’s Task Force on Global Warming. She is the former managing director of the Outrider Foundation’s climate program.