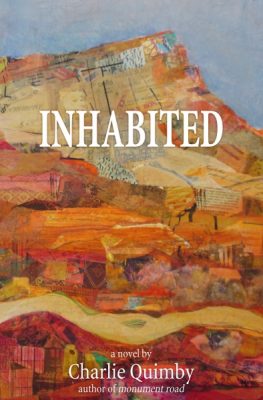 NOTE Location Change – This month only, Writers on Writing will be held at Tin Bins Cafe, right next door to Dock Cafe.

Writers on Writing, an event series fashioned after the beloved Totally Criminal Cocktail Hour, will meet on the third Wednesday of the month at Tin Bins Cafe (Dec only). You can expect the same format as TCCH but with writers of other genres discussing their work.

About Inhabited: Meg Mogrin sells pricey houses, belongs to the mayor’s inner circle and hopes her hometown can attract a game-changing development. Isaac Samson lives in a tent, abhors disorder and believes Thomas Edison invented the Reagan presidency. Displaced by the town’s crackdown on vagrancy, Isaac struggles to regain stability, while Meg contends with conflicted roles assisting the developer and serving on the homeless coalition. Then Isaac’s quest to return a lost artifact intrudes into Meg’s tidy world, shaking her sense of security and virtuousness. This character-rich novel explores the dimensions of loss, the boundaries of compassion and the endurance of love.

About Charlie: Charlie Quimby is the author of Monument Road, an Indie Next List pick and Booklist Editors’ Choice in 2013. He began his writing career as playwright and arts journalist, veered into corporate communications and then founded a marketing agency that now purrs along without him. Along the way, he collected awards and developed the notion he had a few good novels in him. A native Coloradan and adopted Minnesotan, he is at home in both places.