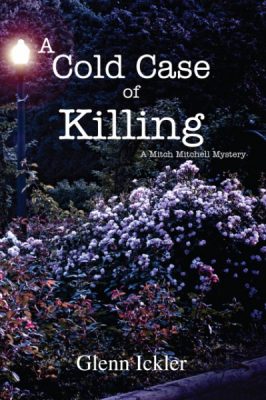 Stop in to say hello to author Glenn Ickler and get your copy of Mitch Mitchell Mystery #5 – A Cold Case of Killing.

Marilee Anderson disappeared twenty-five years ago at the age of fifteen, but police are digging up the rose garden behind her parents home in search of new evidence on a hot summer day in St. Paul. Marilee was last seen on a Sunday morning, when her father sent her off to a convenience store three blocks from home to buy a loaf of bread. Reporter Warren Mitch Mitchell and photographer Alan Jeffrey of the Daily Dispatch are the first newsmen on the scene at the Anderson home, but they learn almost nothing from closed-mouthed police until the diggers turn up a human skeleton. To everyone’s amazement, the bones prove to be those of a young adult male. Police suspect that the mysterious remains are those of Jimmy Bjornquist, a teenager who worked at the convenience store and disappeared the same day as Marilee. But Jimmy turns up living on the West Coast, and he tells Mitch what happened at the store on the day Marilee vanished. Jimmy’s story raises the possibility that Marilee is still alive somewhere. After a man who offers to give them some current information about Marilee turns up dead, Mitch and Al respond to an invitation from an anonymous phone caller and find themselves staring down the barrel of a gun.

Glenn Ickler is the author of the Mitch and Al Series. His mystery novels include Out at Home, One Death Too Many, Camping on Deadly Grounds, Stage Fright, Murder by Coffee and A Deadly Calling. Ickler was a member of an editorial staff that received a nomination for a Pulitzer Prize.