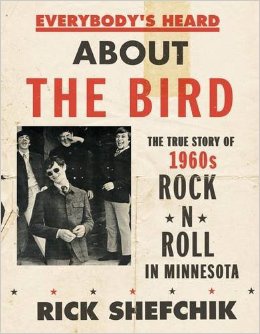 Rock N Roll of the 60's in Minnesota

Shefchik will discuss his latest publication, “Everybody’s Heard About The Bird: The True Story of 1960s Rock N Roll In Minnesota”. The book chronicles the arrival of rock music in Minneapolis by tracing local bands’ first steps into the new genre.

Throughout the 1950s and 60s, Minnesotan artists like the More Tishans, Augie Garcia, Bobby Vee, the Fenderman, and Mike Waggoner and the Bops helped drastically and permanently change the way popular music was written, performed, and produced.

If you’ve ever bought a new needle for a record player or belted out a classic at a rock concert – you won’t want to miss Shefchik’s entertaining and enlightening take on pop-culture history.

Rick Shefchik spent almost thirty years in daily journalism, mostly as a critic, reporter and columnist for theSt. Paul Pioneer Press. He is the author of From Fields to Fairways: Classic Golf Clubs of Minnesota. He’s a novelist and author of three works of nonfiction and has been in several working bands as a guitarist and singer.